The Secrets of Effective Radio Advertising In 2021

It is an efficient way to ensure that you have reached the right audience which would greatly increase brand awareness with the help of a top advertising agency. 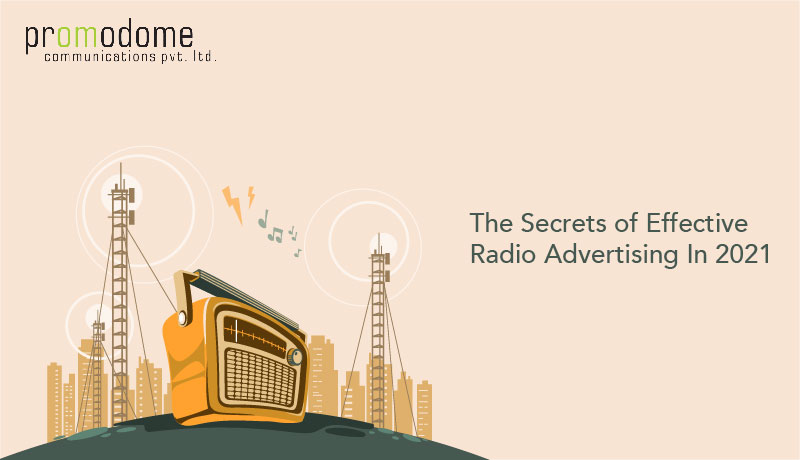 Radio is a great place to advertise effectively. Radio advertising agency tremendous reach and can target a niche audience that makes them interested in your product and services. That being said, it is important to know a few things to get familiar with radio advertising and make the most out of it.

To give you an idea why you should go for radio advertisements, here are the quick advantages that come with it. As said earlier, radio has a massive reach and can be used to target a specific audience. It is also cost-effective as the production cost is less and is fast to produce. Radio also improves brand awareness as it lets you speak with your audience directly. The fact that it’s available everywhere and anytime is a great advantage as well.

Now that you are aware of the advantages, it’s time to know how to utilize them for a successful campaign.

The format determines which audience the station appeals to. It is an efficient way to ensure that you have reached the right audience which would greatly increase brand awareness with the help of a top advertising agency.

You should also decide which format is best for each demographic. You can’t reach out to the teens if you advertise on a station that targets adults in their 40s. It must to understand that and know which audience you want to target.

Radio Advertisements are call spots, and businesses buy these to promote their brand. It further divides into three types — lives read, sponsorship, and product spot. You should know the difference between them and choose the one that suits your needs.

Live read often happens at events where commentators perform live reads, reading the brand name aloud. It’s a quick and easy way to get the advertisement to reach more people. Radio hosts who are popular and have many followers are also hiring to do the live reads.

Many radio stations offer onsite events to advertisers. Such events are host by popular local and regional on-air personalities. Through live broadcasting, at the business location, they try to get their fans to visit the business.

Advertising through sponsorship is usually done by inserting the advertisement into the weather, sports score, and such segments of the show. The advertiser’s name will be mention by the announcer as the sponsor of the segment. This type of advertisement usually uses for increasing brand recognition.

In case the advertiser requires a full-blown radio advertising agency, a traditionally produce spot is the right option. These informative advertisements include dialogues, voice actors, story and jingles.

How Much Does Radio Advertisements Cost?

The cost depends on a couple of factors. The duration of the radio commercial such as 15s, the 30s, or 60s. The time of the day when it runs and which station you are choosing decides the cost of your advertisement. Morning and evening spots are generally more expensive than the afternoon and late-night spots.

Production is also a deciding factor in the total cost and depends on your need for music, voice actors, and other services. Additionally, it also varies depending on the type of radio spot you are selecting.

You have to be careful with the time at which you want your radio commercial to run. Radio stations have an inventory of around 18 minutes of digital advertisement every hour, which they sell in increments of 15s, the 30s, and 60s. Not every minute is priced equally and depends on the audience size that shifts according to the time of the day. A large portion of the listeners are commuters hence the morning and evening shows have larger audiences compared to the afternoon and late night.

Most people listen in the morning travel hour, from 6 a.m. to 10 a.m. They’re also at their most receptive—ready for the day’s news, as well as the news about your product.

Midday, from 10 a.m. to 3 p.m., has far fewer listeners, but they are frequently extremely loyal to a particular station. These people listen to the radio while they work, and their listening patterns are fairly predictable.

You have the option of writing your own ad copy, hiring an advertising agency in Delhi, or having the radio station do it for you. You must ensure that your advertisement attracts people’s attention. Get across one or two compelling, concise, and easy-to-understand messages that will encourage consumers to buy your product or service. Has a call to action, such as a special deal that is only available for a limited period. It should clearly explain the next step, such as the store’s location. Also, ensure that there is a lot of repetition.

As a new advertiser, you might have suspicions whether your ads would run correctly or worse not run at all. The salespeople will give you all sorts of promises. Although it is uncommon for the ads to be skipped, it might happen. You should monitor your ads and ensure that you are getting the exposure that you are paying for.

If your target demographic is broad and you’ve had success testing radio commercials on one station, you might want to investigate running ads on multiple stations at once. A blockage is when an advertisement is broadcast on multiple television or radio channels at the same time. The benefits of this method include many exposures, reaching those who regularly change stations, and being more likely to gain from word-of-mouth or viewers promoting you after the advertisements have shown.

The above-mentioned tips and pointers should come in handy whether it’s your first ad campaign or you already have experience with it. Moreover, pairing radio advertising with services offered by a good digital marketing agency in Delhi can greatly enhance your whole advertisement experience. So, what are you waiting for just go for it!