What are the advantages of using a double acting hydraulic cylinder?

Today, there are several industries that require the best lifting equipment that can increase the efficiency of their operations without having an effect on the quality. And this is where hydraulic cylinders come into the play! But, when you step out in the market there are several varieties of cylinders available that might confuse you, and this is why you need to understand their certain advantages. 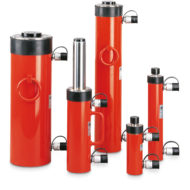 Much larger potential for force

A single hydraulic cylinder will deliver force in only one particular direction. A double cylinder will output the force both ways, depending upon its movement to be in or out. This will create a much larger force level that is more trustable and control can be easier too in comparison to a single force structure.

Higher control over the system

If your cylinder is giving more force, then you will have much better control. With the use of a double-acting hydraulic cylinder, you do not have to worry about any kind of slips, trips, and difficulties along with the system. Along with the cylinder, the force will remain constant and it is a very smooth process to maintain and control your tasks like controlling a crane or lowering of any platform.

With more fluid, the double-acting hydraulic cylinder earns an advantage and increases its efficiency and energy during the work output. This will help you in making the task more accurate and in improving the overall productivity of the hydraulic cylinder. It is easier and much faster to learn and operate for higher output, which ultimately makes the procedure of making use of the cylinder very easy.