mini-tutorial about the Spring framework What is IOC and DI and how they help us https://www.linkedin.com/pulse/2min-spring-framework-tutorial-hagay-onn-the-spot-/ 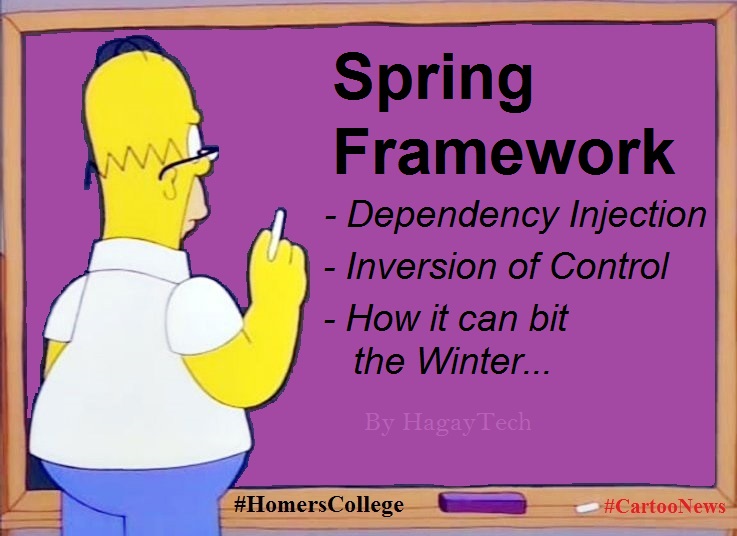 I was asked about Spring today, so I'm sharing here a mini-tutorial about the framework. Have Fun and many Smiles, because the Spring/Winter is coming (choose yours ;-), Hagay.

What is Spring? A lightweight (only few MB), open-source development framework, mainly used for building web applications, on top of the Java-SE/EE platform. Spring’s main leading features/concepts are:

Dependency-Injection (DI) - The BeanFactory is used to create and configure a full application. The Factory design-pattern separates the objects creation, configuration and dependencies from the application’s code. There are several available Bean-Factories, where the most commonly used currently is the org.springframework.beans.factory.xml.XmlBeanFactory. This container loads the application beans configuration based on XML file with tagged definitions. Each bean is declared in an XML <bean> tag definition and includes its configuration and initialization metadata, needed to start up an instance. The application itself is a bean.

Each bean has an attribute named "singleton" (true by default) that specifies if the bean should be a singleton, else it becomes a prototype/instance bean.

Each bean has a scope attribute that defines how to instantiate the bean objects. The 2 most common values of the scope are prototype and singleton. Prototype scope is used when a new bean instance to be produced each time, while singleton is used when the same instance of a bean must be returned every time. As mentioned Spring Beans are singletons by default.

The dependency-injection of beans can be defined the container invokes a class constructor with arguments, or as Setter-based by calling setter methods on beans after invoking a No-Argument Constructor or no-argument static factory method to instantiate the bean. Constructor-based DI is more suitable for mandatory dependencies, while Setter-based is used for optional dependencies.

DAO (Data-Access /s) are used with JDBC to abstract the database access/query code and maintain it in one place. Other frameworks, like Hibernate/JDO, are enabled using the ORM module.

That's all for today, See ya next post! Hagay