Blockchain: A Breakthrough in the World of IoT and AI Blockchain technology is giving significant impetus to AI and IoT. Although both AI & IoT were released decades before Blockchain, the security concerns of both technologies have been improved by Blockchain.

Blockchain technology has been making waves in the tech industry by improving existing systems, and in some cases, disrupting entire industries. Blockchain is proving its worth to AI & IoT.

However, many people are skeptical of how Blockchain will work with AI/IoT since these technologies operate on two different platforms – one centralized and the other decentralized.

But don’t worry—we’ll walk you through why and how the two can work together harmoniously and make your AI/IoT projects more secure, accessible, and scalable.

Here’s an infographic showcasing the popularity of blockchain in different industry verticals: 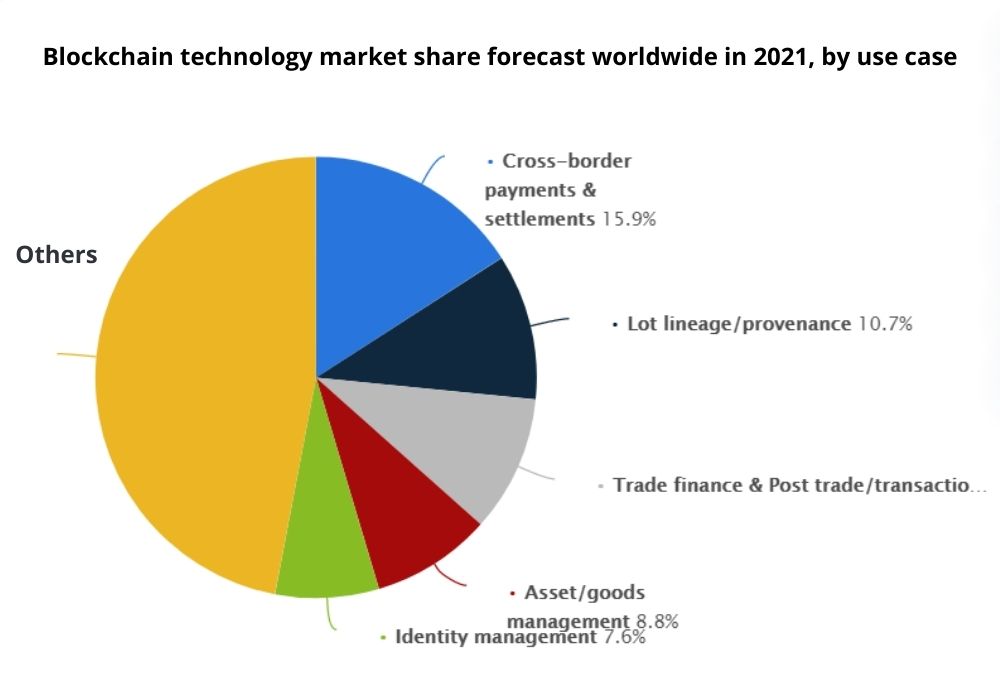 Blockchain technology promises to enhance IoT by providing users with a level of security beyond what we have today. Blockchain-based digital ledgers offer a decentralized, incorruptible record of all transactions, meaning sensitive data is accessible only by users having permission.

In addition, transactions get encrypted to ensure that network participants’ privacy at all times. Due to Blockchain’s advanced encryption techniques and anonymized platform, it is no surprise that an estimated 80 percent of blockchain developers are working on projects related to IoT solutions, as per Failory.

Blockchain has enormous potential for tracking assets across complex supply chains—and there are plenty of opportunities for companies operating in the AI and IoT space.

While we are still to witness an advanced and intensive combination of the three technologies in daily life, what we are already seeing includes the following:

Source of the above projects related data: Markets & Markets

The Present Scenario of Blockchain in IoT

While Blockchain is yet to disrupt industries outside of financial services, IoT creates a massive market opportunity of around $267 billion by 2022, as per Failory.

From smart home devices like Amazon Echo to self-driving cars, Blockchain provides vital help to make these products more secure than ever before by creating distributed systems for storing and sharing data. IoT development company enhances the security of the projects by leveraging Blockchain

Blockchain is also serving as a ledger that records data generated by smart devices within IoT networks—helping provide more reliable data sets for training machine learning models that are increasingly able to reason based on input data.

The Present Scenario of Blockchain in AI

Using Blockchain, which is essentially an open record of transactions protected by cryptography, business owners can better assess how much money they will save through energy efficiency measures, like smart cooling and heating systems.

Once implemented, everyone on a blockchain network has updated information about how much money gets saved. It makes it more difficult for companies to fudge their numbers or sell fake news about their products.

The Future Potential of Blockchain, IoT, and AI

As we continue to move forward at an ever-increasing pace, we need technology that can keep up with us. Blockchain is a perfect match for new developments in Artificial Intelligence and the Internet of Things (IoT) — two cutting-edge technologies that we see more every day.

Both AI and IoT will make significant changes to our daily lives, but how exactly? By combining blockchain technology with these growing systems, we’ll have security that is unrivaled today—and information quicker than ever before.

In other words, you’ll have security on your devices like never before — all while being able to interact quickly with trends faster than anyone else.

In addition, since companies across every industry are investing heavily in blockchain development projects, many blockchain frameworks for IoT and AI will likely be available sooner rather than later.

Here are a few case studies depicting the application of Blockchain in AI and IoT by renowned companies:

Combined application of Blockchain & AI: The firm focuses on making an advanced combination of AI with Blockchain to enhance transparency in the supply chain. The main products of the supply chain management include seafood, coffee, and minerals.

While Blockchain has been primarily used to create immutable records of the product supply chain from raw material to finished goods, Artificial Intelligence has been used to analyze crops and produce accurate predictions of growing patterns.

Achievements of the Project: The firm has created mobile apps that keep immutable records of the raw material and produce accurate predictions about the quality of products.

Combined application of Blockchain & IoT: Helium is a reputed IT organization that build=t the world’s first decentralized machine network. The company specializes in creating solutions that connect Blockchain with low power consumption IoT devices, including routers and microchips.

Achievements of the Project: The company successfully created and employed the Blockchain-based IoT devices that run successfully. The plan includes implementing nodes throughout California, Boston, and the U.K. The motto of the project is to create and test strong and secured peer-to-peer network strength.

These days, it seems like just about everyone is saying that AI, Blockchain, and IoT will change everything. And the effect is already visible in daily life with Siri, Alexa, Netflix, etc. Stay ahead in the game by hiring AI developers for advanced software solutions suiting your business and target audience.

Many experts refer to these three advancements as part of a new digital revolution (we’re not sure if we can get behind that term). There’s a lot of buzz surrounding their future.

The tech community is constantly buzzing with excitement over innovations coming out of each industry. Still, when you look at it closely, there are many possible use cases for each technology that even seasoned experts have trouble predicting what might happen next.